The tranquil beauty of the Uminobe no Michi belies its blood-spattered past. Following the ridgeline of a range of small mountains along the northeastern edge of Lake Biwa in Shiga Prefecture, the trail runs south from the foot of storied Shizugatake Peak at the southern end of tiny Lake Yogo to Mt. Yamamoto, a distance of some 10 kilometres. While a canopy of trees shields Lake Biwa from constant inspection, there are a number of lookout spots. The nine Hailstones who walked Uminobe no Michi for the annual Autumn Haike were rewarded with fabulous views of the lakes and Chikubushima, and little, if any, blood was added to the trail in the process, though plenty of sweat.

October 12th. We arrive at JR Yogo Station around 10:45 am and skirt the northern edge of Lake Yogo, passing a gnarled willow tree that features in one version of the ancient legend about an angelic maiden and her heavenly robe (天女の羽衣 Tennyo no Hagoromo).

When the woman, attracted by the lake’s beauty, came to bathe in it, a local widower found her robe, transparent as a dragonfly’s wing, hung on the willow. Meanwhile, back in our modern world, an equally pellucid shower freshens the unseasonably warm October morning.

With a grin,
passing him
a bastard persimmon –
edge of the lake

Nearing the southern end of the lake, before the Shizugatake trailhead and the start of the hike proper, we are further inveigled by a sign at the bottom of a mysterious trail, tersely labelled「俳句の道」haiku no michi. But

While fishing is banned at many places around the lake (also known as 鏡湖 Mirror Lake), there is a designated spot at the southern end, and it is being made use of.

Fisherman’s line
pulls the reflection
to the lake shore

While we have dawdled a little circling one half of the lake, we make up time on the rather steep 300-metre ascent of Shizugatake, arriving before 1:00 pm. At the summit (421m) we are rewarded with spectacular prospects of Lake Biwa, Lake Yogo, and, indeed, the ridgeline of the entire hike ahead of us, all the way to Mt. Yamamoto.

We do not remain unchallenged for long, however. A sudden, gusty shower hits more heavily than the spritzing around Lake Yogo, and sends us running for cover.

Shizugatake –
from Lake Yogo, autumn
has mounted its attack 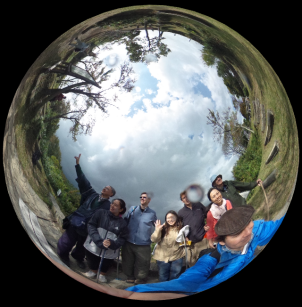 In May 1583, Shizugatake was the site of a fierce battle (賤ヶ岳の戦い Shizugatake no Tatakai) between the forces of Hideyoshi Toyotomi and Shibata Katsuie, resulting in many casualties on the strategically important summit. One memorial depicts the spears of the seven generals of Hideyoshi who successfully routed the challengers.

Despite the grim history, there is an almost miraculous ‘silver lining’ to be found in the changeable weather: 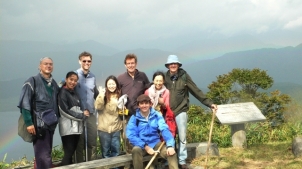 When we have had our fill of lunch and the panoramic views, we return to the trail. As most visitors ascend and descend Shizugatake via the ropeway near the summit, we soon have the path to ourselves. Or do we?

Soft underfoot and tree-shaded, the chestnut- and acorn-strewn path occasionally debouches into a clearing with expansive views.

The main evidence of the trail’s historical past is frequent tumuli, tenebrous bulges on the treeline. The trail itself is mostly level, albeit with occasional undulations.

on Biwa’s ancient battlefields,
the scattered armour
of chestnuts

In the middle of the afternoon, Maeda-san decides to explore a secret trail that descends steeply to the west, coming out near lonely Uro Shrine 有漏神社 on a seldom-trodden shore of Oku-Biwa. I accompany him on the foolhardy scramble up and down the crumbling, rock-strewn path, while the other members rest before forging ahead on the main trail, Tito kindly staying behind to mind our packs. We gain some grand, uncommon views of the lake, but not much else.

About an hour later, the party reunites, and commits to the final push up Mt. Yamamoto, which proves to be almost as steep as the Shizugatake ascent, though the summit, at 324m, is considerably lower.

The hard climb separates the party into small groups strung out along the trail. I am first to join Jiko on the windy summit for the day’s last great vista.

There are two possible descents, and we choose the lesser-used one to the west allowing us a last glance of the effulgent lake. This proves costly, as the path is slippery with dry, sandy gravel, and must be taken painstakingly slowly in the advancing twilight. We reach the bottom by 5:40 pm, but after a mad dash along the road there is no sign of the promised bus to Kawake Station, so eventually we hire two taxis to Nagahama Station. After a lot of hunting, we chance on a decent izakaya with a private room, perfect for a postprandial haiku-sharing session. It has been a demanding one-day autumn haike, but a memorable one.

The path will take us there:
all we have to do is walk
towards this autumn’s
mesh of light 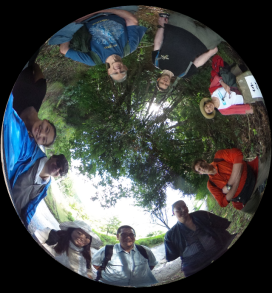