The air about, that of summer;
its flowing stream water
has an autumnal feel:
but beneath the ground, Mt. Himuro
is winter to its core
…………………….. (waka by Fujiwara Yoshitsune)

Being admin. ed. of a haiku space that goes by the name of the “Icebox,” I’m always on the lookout for Himuro Jinja (ancient Ice-hut Shrines) … and, so far this year, I’ve managed to visit two.

At the first, not far from Todaiji in Nara City, you can have your fortune told by sanctified ice. You pick your fortune from a box, but it looks blank until you place it onto the block of ice before the worship hall. Then the words come through … 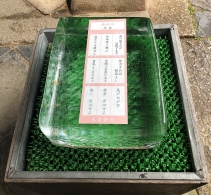 Close by the second shrine, what is perhaps the original Himuro Jinja (at Fukuzumi in Tsuge-mura, near Tenri), there’s an ancient-style 氷室 himuro still used for ice storage till the summer, … 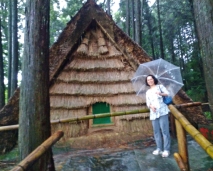 … though they no longer provide ice to the Emperor, as they used to back in Nintoku’s time (early Kofun Period). As a sacred place, the shrine itself is said to go back 1,600 years. The ice, cut as blocks from a nearby pond in winter, is stored underground beneath the hut’s ‘floor’. It is further insulated with bundles of straw.