Happy New Year 20-20! MMXX. With a name like that, this is sure to be a really cool year — or so I told my haiku students at Kyoto University yesterday! It’s also the Year of the Rat, the first of the zodiac animals.

On January 1st, guided by the coolest of my Japanese friends, I went to the rocky islet of Miyado Benten in Loch Tōgō, Tottori, to pay my respects – as a poet might – to the goddess thought to preside over the Arts.

As we reached the sacred island, something unusual, yet truly auspicious, caught my eye. May my haiqua image bring you, too, some good luck!

Stopping outside
A house of quiet embroidery …
Dog’s muzzle
To my hand.

We wish our readers a Happy New Year of the Dog. For you all, may its muzzle softly lick!

Kigo (season words) generally contain a sense of time passing, and this is particularly so when a change of year is concerned. The season word, kozo-kotoshi 去年今年 (last year/this year), when used in a haiku, will conjure deep emotion for the changing of one year into the next on New Year’s Day. In a single night, yesterday will become part of the old year and today, the new. The New Year (kotoshi, or shin-nen) physically stands on the base of the Old Year (kozo, kyonen, or furutoshi).

The existence of time in this world is said to be the most perplexing enigma for the physicists to theorize over. How is it, for example, that two years can share a time border? And should such a boundary be accurate to the nearest second? Or can it be further refined to the nearest milli-, micro-, nano-, or even pico-second? Perhaps not, … although 1/∞ (infinity) second surely exists!

New Year hike –
my hot lunch at the summit,
cup noodles as usual

.  “It is the line, as the custodian of the syllable, that controls the shape of a poem. Vowels expand the line; consonants contract it. … The line is the divining rod that releases the wellspring of poetry” (R. Parthasarathy). Perhaps this is also true of lineation in most English haiku?
.  I’ve just finished reading R.P.’s magnificent English translation of the 5th Century Tamil epic, the Cilappatikaram. On the first day of this year, out on the Coromandel Coast near the mouth of the Kaveri River at Poombukar, I had stumbled on a tiny local museum commemorating this gem of world literature. Thus was my interest in the epic awakened.
.  Epics could not be farther away from haiku in their length and form, and yet, strolling along the seashore afterwards amidst the holiday throng, I found a simple haiku to take away from my encounter with the mythic/erotic/heroic story of Kannaki and Kovalam I’d had that day …

Lithe black limbs flailing
As they dash into the sea …
Waves crash back.

autumn wind
a swimming pool’s worth
of bare trees

Happy New Year to all our readers!
An interesting two-part article by Joan Zimmerman has appeared at Contemporary Haibun Online. The first one is published at http://contemporaryhaibunonline.com/pages93/aaZimmerman_Article.html
and entitled “What Haibun Poets Can Learn From Non-haikai Western Poetry Practices”.
The second is at http://contemporaryhaibunonline.com/pages94/Article_Zimmerman.html and is entitled “”What English-Language Haibun Poets Can Learn From Japanese Practices”.

A bridge over the city

Connecting one and all—

WordPress.com prepared a 2011 annual report for this blog. Here’s an excerpt:

The concert hall at the Sydney Opera House holds 2,700 people. This blog was viewed about 18,000 times in 2011. If it were a concert at Sydney Opera House, it would take about 7 sold-out performances for that many people to see it. 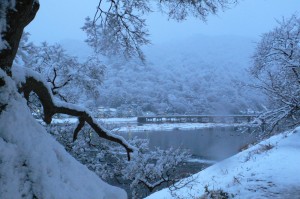 last twilight of the year

a tear to ice

(for Anyan, requiescat in pace)

.
at the bus stop
a flying santa
up the gum tree
(Barbara A. Taylor)
new year advent –
thinking of what ifs
and what might have beens
(Vic Gendrano)
new year moon
icy dusk slips away
down river
(Willie Bandit)
a blue moon
illumines the New Year…
joy to the world
(Keith A. Simmonds)
virgin snow
the fox making prints
for the morning
(Alan Summers)
.
Thank you to the above, and to all who submitted in Jan./Feb. Anyone wishing to submit haiku, kindly do so as a comment on the Submissions page (top right).

Two haiku and a photo, just received from Kamome:

After the great thaw,

From the grass verges.

Kamome writes: I cannot find ‘suspire’ in any online dictionary; I learnt it from Fitzgerald’s quatrain in The Rubaiyat of Omar Khayyam: ‘Now the New Year reviving Old Desires,/The thoughtful Soul to Solitude retires./Where the White Hand of Moses on the Bough/Puts out, and Jesus from the Ground suspires.’ There is definitely a New Year association, of the rebirth of the seasons, and of life still breathing in us.

Appears on my armchair drape –

‘Home is where you are.’