On April 2, two or three members of the Hailstone Haiku Circle will join the Meguro International Haiku Circle for an English haiku ginko and reading event in the Yanaka-Ueno district of Tokyo. For many years, their kukai was led by Catherine Urquhart, who has now returned to the UK and created the Edinburgh Haiku Circle. In the MIHC’s 2014 book, Haiku: 20th Anniversary, kindly sent me by Yasuomi Koganei, there is a piece by Catherine entitled, If Burns had been a haiku poet …, and with her permission, I will here reproduce five of her lovely ‘Japanese haiku’ versions of passages from poems by the 18th Century Scottish Bard, Robert Burns, who was a contemporary of Issa and, with his eye on the poor man, animals, insects and the uncompromising weather, very much a kindred spirit.
.

(from The Cotter’s Saturday Night)

needles of frost
love and drunkenness
among beggars

(from The Jolly Beggars)

(from To a Louse)

(from Elegy on Captain Matthew Henderson)

.. Several streams of spring water come together, running down a steep mountainside, soon forming a brook, which entertains us with its beautiful cantata as it courses between mossy rocks. Its soprano is like the singing of a dreaming girl, while its bass is like the wailing of a lover. The passing wind also adds a voice, sometimes resembling the soft whispering of a mother while her baby is asleep, and at other times, sounding harsh like a father’s scolding of a mischievous child. Bird songs also provide accompaniment from time to time. The vivace of spring warblers announces the arrival of warm weather. Cuckoos put us to sleep in summer with their monotonous andante. Shrikes warn us with their autumn staccato to prepare for frost and snow. Crows and owls frighten us in winter with their fortissimo. For me, brooks are the source of endless musical pleasures.
.. Here I am reminded of Wordsworth’s description of a ‘rill’ that runs by his birthplace:
…. Oh, many a time have I, a five-years’ child,
…. A naked boy, in one delightful rill,
…. A little mill-race severed from his stream,
…. Made one long bathing of a summer’s day —
.. When I visited Cockermouth, I was impressed by his birthplace, a sturdy stone building, probably the largest in the whole town, but I did not think the rill was deep enough for swimming, nor could I spot the mill. Probably this mill had gone long before and the rill had lost much of its water.
.. I also found ‘a playmate’ in a brook when I was evacuated from Tokyo to a small country village in Hiroshima. I was a middle-school boy, and spent most of my summer days fishing in the brook running by my house. The water was so clear that I was able to see every stone and pebble at the bottom. I could also see fish swimming against the stream, but I soon learned they were not easily caught. In a brook like this, you should hide yourself behind a tree or a rock and cast your line in the foaming part of the stream. If you do this, before the bait sinks to the bottom, you will have a fish hooked on your line. However, I had to spend more than a year to learn this trick. Another pleasure I found in the brook was the fireflies that came out in early summer. I saw them flying in their hundreds above the brook, blinking their lights in unison. They would also sometimes form balls of light on grass leaves. However, it was very sad to see a few latecomers flying away into bamboo thickets at the end of the season. They were like ghosts returning to their graves.
.. As Wordsworth mentions, brooks are often dotted with water mills. Unlike English mills, which are made of stone, mills along Japanese brooks are wooden shacks, and instead of damming the brooks, water is led to the mills via wooden or bamboo pipes. The upper side of these pipes is open, so that you can see the water gleaming as it passes though them. It always amazes me how silently the water can run through the pipes. The mills are equipped either with waterwheels, or with four arms, each with a kind of bucket at the end. While the latter contraptions are more primitive, musically they make more interesting sounds. As the pipe water drops, waterwheels turn with a continuous noise like the rustling of a brush against rough cloth, but the rotating arms provide an intermittent sound as each bucket suddenly dumps its load. In either case, the mills are equipped with wooden hammers that pound wheat or rice. As the hammers rise they squeak, and as they come down, they surprise us with their heavy pounding noise. This is repeated night and day, but the rhythmical sound of such old-fashioned mills never tires our ears.

…. Dammed by a brocade
…. Of golden and scarlet leaves,
…. The brook stays a while.

…. The brook hibernates,
…. Its stream hardly audible,
…. Laid in snow and ice.

Two haiku and a photo, just received from Kamome:

After the great thaw, 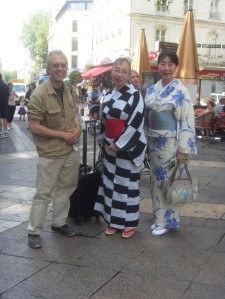 From the grass verges.

Kamome writes: I cannot find ‘suspire’ in any online dictionary; I learnt it from Fitzgerald’s quatrain in The Rubaiyat of Omar Khayyam: ‘Now the New Year reviving Old Desires,/The thoughtful Soul to Solitude retires./Where the White Hand of Moses on the Bough/Puts out, and Jesus from the Ground suspires.’ There is definitely a New Year association, of the rebirth of the seasons, and of life still breathing in us.

Appears on my armchair drape –

‘Home is where you are.’

My cheek was hit and hit:

pelted and bounced on the road.

When it cleared again

something whipped and knowledgeable

and left me there with my chances.

I made a small hard ball

of burning water running from my hand

just as I make this now

out of the melt of the real thing

smarting into its absence.

To be reckoned with, all the same,

those brats of showers.

The way they refused permission,

the way they were perfect first

and then in no time dirty slush …