At last, after coronavirus cancellations and a rain postponement the previous week, a real opportunity to celebrate our new book! 3 April 2021 – Hailstone held a hanami kukai (haiku evaluation meet) in Uji, on a large groundsheet on Nakanoshima Island under some of its still-blossoming cherry trees. Participants read aloud and commented on their favourite 3 haiku from the ‘I Wish‘ anthology (published last December). Afterwards, a ginko (composition stroll) was held on the north bank of the river, visiting Uji Shrine, the Heian Period Ujikami Shrine, and the rocky approach to Koshoji Temple.

Congratulations to both poets. Your haiku were selected as favourites from a field of 218 in the book!

That very week, Masahiro Nakagawa had sent in this haiku:

The cover of the book, by Richard Steiner, also portrays streaming cherry petals. Now, here we were celebrating its publication and enjoyment on the last possible day for a hanami this year.

Hailstone Haiku Circle was founded on 11.11.2000 at a meet in Shiga prefecture. That day, we visited Ukimido 浮御堂 and noticed a rainbow over the northern part of Lake Biwa. It had seemed to stay with us, there to the right of  Mt. Hira, all afternoon long! 20 years on, I feel that rainbow is still with us now, shining on miraculously in the sun and rain. 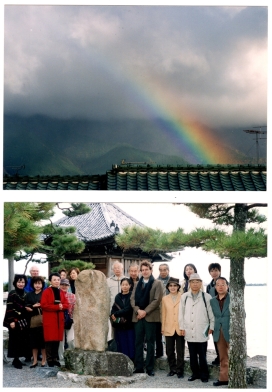 So, we are 20 years old, and may be feeling in need of an anniversary collection? Well, it has just come out! I’ve called the book ‘I Wish’ … for reasons only hinted at in the foreword and in the ‘wish’ haiku that crop up here and there within the book. The cover was painted by Richard Steiner (Tosai). There is an afterword by Gerald (Duro Jaiye). Besides the individual author pages, the book also contains rensaku (haiku sequences) on earthquake, flood, heatwave, typhoon, wildfire, and, of course, on pandemic, too. There is also a short In Memoriam section, a Glossary and an Events List at the end. No haibun, though, as Hailstone will be issuing an anthology of Genjuan Awarded Pieces (2018-20) in a few more months – and that will be “haibun max”! Watch this space. 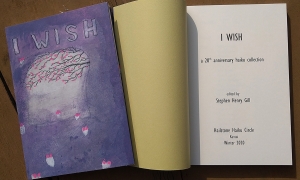 ‘I Wish’ is A6 (pocket-size), 104pp, costs ￥1,200 for single copies, and contains 218 haiku by about 60 poets, both Japanese and foreigners, mainly living in Kansai, West Japan. It will be available at most Hailstone events from Dec. 24 onwards … till at least mid-spring next year and can be ordered through the avenues described at the bottom of our Publications page. The publications officer will then send you details of payment options, depending on where you are, as well as of postage and packing costs.

I hope you will enjoy our new book. Long live that Hailstone rainbow !

We seldom advertise others’ books on this site, but, given that two Hailstones (NY and SHG) and one recent visitor and Genjuan Haibun Grand Prix-winner (MC) are featured, we thought we would make an exception for ‘Journeys 2015’, which contains no less than 145 haibun, some published for the first time.

If we look down the list of contributors’ names, we must conclude that this is sure to be an excellent collection of contemporary world haibun and fortifies the mission to make haibun a genre of world literature, one of the twin objectives of the Genjuan Haibun Contest (the other being to re-introduce the genre to its mother nation, Japan).

Tirelessly edited by Angelee Deodhar in Chandigarh, India. Hopefully, the collection will gain a large Indian readership, not to mention many others around the world. For a list of contributors please go here: http://contemporaryhaibunonline.com/pages113/A_News_Journeys2015.html and for ordering details, here: http://www.amazon.com/Journeys-2015-Anthology-International-Haibun/dp/1515359875

The Office of the Genjuan Haibun Contest hopes that by now all those who took part in the Genjuan Haibun Contest in any or all of the years 2012, 2013 and 2014 will have received their free copy of the recently published compilation of decorated pieces (see March 30 posting below for description and a photo of the cover). We trust you will enjoy reading it. If you still haven’t received it by the end of May, please contact our officer, Eiko Mori (her details are given on the Genjuan Guidelines page – click link at top right). If you notice any errors of transcription, please notify us.

One, for which we sincerely apologize, has recently been discovered on page 76 in John Kinory’s piece, Prime Meridian. Near the end, “He smile” should be “Her smile” and, in the same sentence, “had brought me” should have been “had bought me”.

Fortunately, we have already received some very encouraging feedback from prominent haibun writers:

“With its 120 pages, judges’ comments and ‘classical Japanese haibun’ this is a considerable work, and a significant contribution to contemporary haibun literature, meriting congratulations to all involved. Incidentally, it’s also a crisp and attractive book production.” (Ken Jones)

“Congratulations on another successful haibun contest. it has been instrumental in keeping haibun an active and vibrant genre. thanks for the good work.” (Jim Kacian)

“… a masterpiece of inspiration and production, not to overlook generosity and ‘haiku spirit’. I was completely taken by surprise and totally overwhelmed to receive it. Thank you so much.” (David Cobb)

Should you wish to order your own copy, details are given on our Publications page (click link at top right).

The four prize-winning pieces in the 2015 Contest are now up on our Genjuan ’15 Winning Haibun page (link at top right).

The Guidelines for the 2016 Contest are now up on our Genjuan Guidelines page (via another link at top right). 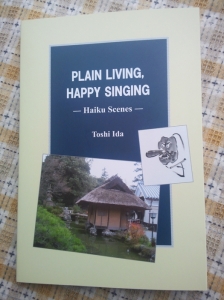 From the bus stop

Toshi Ida’s new book has just been delivered from the printers! It is a solo English haiku collection, complete with Japanese versions, divided into four seasonal sections. There are also many nice haiga illustrations and photos (by the author himself), and a series of ten haibun pieces at the back of the book. The title of the book alludes to a lament by Wordsworth, “Plain living and high thinking are no more”, but also to the natural bird-like ‘singing’ of the author’s heart as he lives the haiku ethic every day. The book’s subtitle is ‘Haiku Scenes’. This is the first individual collection published by the Hailstone Haiku Circle. Congratulations to Toshi!

￥860 (U.S.$ 8) + p&p. The book will soon be available at Hailstone events, or in the post via Mari Kawaguchi (domestic) and Hisashi Miyazaki (international). Contact details are given on our Publications page (via the page link at top right).

Hailstone Haiku Circle’s latest anthology, Meltdown, containing exactly 500 poems, mostly haiku, was launched on a cold, wet evening (Dec. 26th) at the Umenohana Restaurant in Senri-Chuo, Osaka. 18 attended. Hosts: Akito Mori & Mizuho Shibuya. Editor, Stephen H. Gill, and woodprint cover illustrator, Richard Steiner, were guests on the occasion.  The title alludes to the 2011 Tohoku-Fukushima Disaster, and the book opens with haiku on that theme, all lightly brushed but telling. The book contains much else besides – humour, wonder, warmth …
As with our 2005 book, Enhaiklopedia, haiku are grouped into topic sections (e.g. WAR, VOLCANO, STUMP, SPORT, METEOR, LAKE, KISS, JEWEL, HYDRANGEA, HUDDLE, FUTURE, FOG, COMPLAINT, BUDDHA, BOAT) beginning with Z and ending with A. In an attempt to evoke some of the ‘back to the future’ feel of the Japan of today, the book reads back to front, in traditional Japanese fashion (the picture shows the front cover). It is a bold experiment which, it is hoped, works well.
Details of ordering for non-contributors (both in Japan and abroad) are given on the Icebox Publications page (link listed at top right).
. 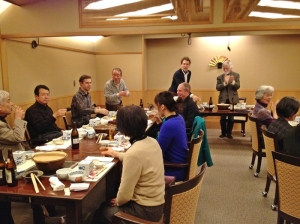 Rejoice! … Our most recent book, One Hundred Poets on Mount Ogura, One Poem Each (published jointly in 2010 by Hailstone Haiku Circle and People Together for Mount Ogura), has just been awarded the 2011 Kanterman Merit Prize for Best Anthology by the Haiku Society of America (to my knowledge, the oldest English-language haiku association in the world).  Good news, methinks! http://www.hsa-haiku.org/meritbookawards/merit-book_archive.htm The chief judge this year was Michael Dylan Welch. For your interest, then, here is the bulk of the announcement list:

Some of you may remember Individual Collection Second Place awardee, John Parsons, for his Kikakuza International Haibun Contest Grand Prix masterpiece in 2009. You can read that work via the Kikakuza ’09 Winning Haibun page link at top right.

There are still a few copies of our anthology, One Hundred Poets on Mount Ogura, in stock here in Kyoto.  For enquiries/mail orders, see our Publications page (via link at top right). For those of you who don’t know it, it is bilingual (Eng.-Jap.) and includes a mixture of haiku and tanka, although the former predominate. It sings the praises and cries the shame of the famous mountain.

As light plays through trees
along the narrow mountain path,
the calls of birds:
.. for a while, I can forget
.. the city life I’ve left behind